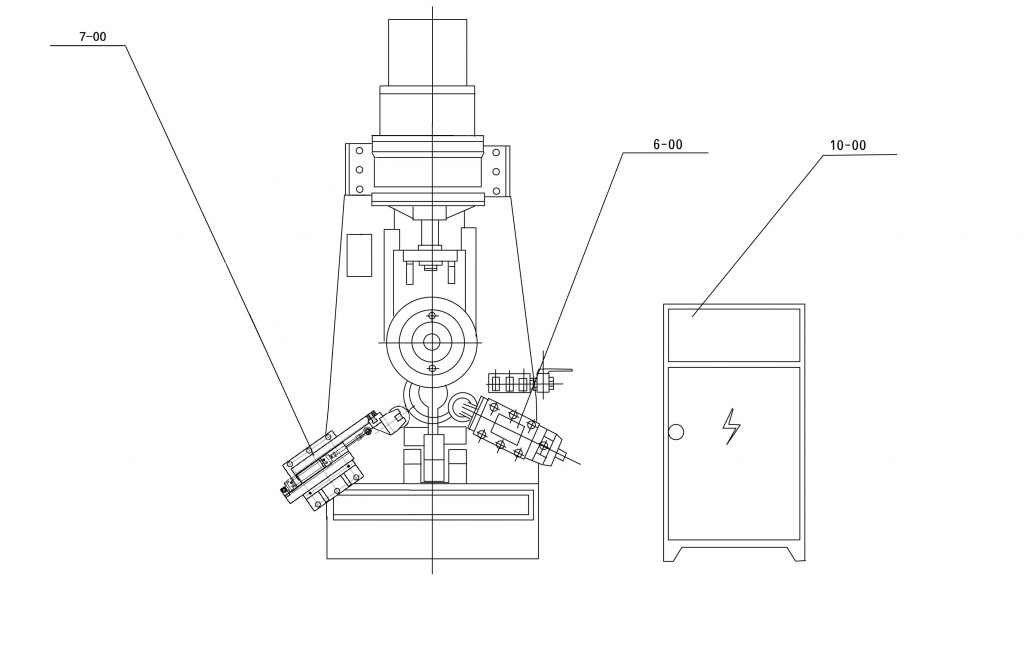 Main body consists of column(No.1),mainstay(No.2) and foot(No.3). there is masonite lead rail in the column,this material has higher service life than the common material at the condition of nearly without lubrication.The structure of lead rail is nonadjustable, process lead rail surface is assembled and need to insure 0.1～0.2（mm）gap. After abrasion for lead rail, it can be added pad to use again after repair and grinding,when beyond repair,it should be changed new masonite again.

3. Slider
The main roller is equiped at the front end of the slider. Driven by cylinder, slider carry out reciprocating motion in the lead rail of column for main body. It adopts sphere join between slider and piston rod of cylinder, screwing the ball end nut can adjust the slider stroke(adjusting the distance between main roller and bearing roller), so as to meet the workpiece requirements of different wall thickness.
The main roller belongs to replaceable mould(specific size refer to the attached drawing)

4. Cylinder
It is the mechanism which drive the slider to move and generate rolling force, in order to control final size easily, precision rolling mechanism is equiped on the top end of cylinder. In the last stage of rolling workpiece, precision rolling mechanism is used to carry out leveling off circle and the last size control to the workpiece with lesser rolling force. For adjusting and operating easily, this mehcanism is equipted on the top end of cylinder, when workpiece close to final size, cushion composed by rubber pad on the top of cylinder start to contact synchronous belt pulley on the cylinder, at this time, the rolling force will reduce by a long way, so the deformation velocity also reduce by a long way, accordingly making the wall thickness of workpiece symmetrical to achieve precision ring rolling purpose. If needing to adjust precision ring rolling position, it can come true by rotating synchronous belt pulley up and down by handwheel.

6. Roller mechanism
Roller mechanism consists of thrust force roller at the right side of body and signal roller at the left side of body, it has the same mechanism for the two group rollers.
Thrust force roller mechanism has the function of reducing oscilation, steadying ring rolling process and levelling off the circle, and the signal roller mechanism is used to level off circle and control final size at the end of ring rolling. According to size of workpiece being rolled, roller position can be adjusted before and after, when adjusting to suitable position, we should screw down the top three binding bolts.
Roller belongs to easily damaged parts, its boundary dimension and size refer to the attached drawing.